(Is it weird that I keep making references to a children’s movie?  Or is it OK because it’s Pixar?)

So, on Saturday, I went racing.  By which I mean, I went to the racetrack with my friend John Morningstar, and acted as ballast for the #20 Free Radicals Chrysler Cordoba.

We didn’t do so well in the heat race (It’s a beginner class, so, some of the drivers aren’t so good at not hitting the other cars) but we came in second place in the main!  I make excellent ballast! 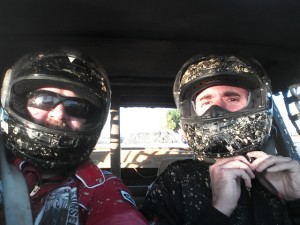 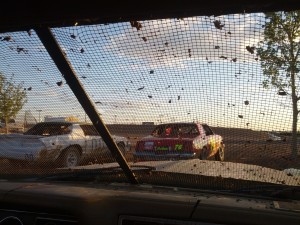 I’m in the sunglasses, John’s in the driver’s seat.  If you’re in town, and want to see the race car itself, it’s parked out in front of Free Radicals (Punk, Greaser, Rockabilly, and Goth clothing and accessories) at the corner of Lead and Yale, 300 Yale Blvd SE in the Student Ghetto. (*cough, ahem* Excuse me. The “Bricklight District”. Mmmmmm, nope. Just can’t say it with a straight face.)

To absolutely no one’s surprise whatsoever, now I want to build a race car of my own and go roundy round.