So, from the beginning, Vector has had some textual issues.

On the original car (remember, this is the 1.1 version, with a different body shell) the inscription “Liebe über Leben” was cut into the sheet metal of the right rear quarterpanel. Unfortunately, that phrase doesn’t really mean anything. (Well, ok, it means “Love of life”, which I don’t think is what Kurt was going for.) He said to me at one point he’d meant for it to say “Liebe über Lebens”. Which also isn’t correct. (“Love about life”.) I think he wanted it to say “Love above life”, as in “Love is more valuable than one’s life”, which would be “Liebe über das Leben”, or possibly “Liebe vor dem Leben”.

Even more unfortunately, on the 1.1 car, the inscription was rendered as “Liebe über Legens”. Which means, uh, “Put love on”.  As in, like socks. 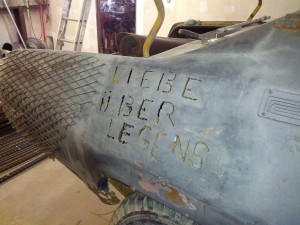 So, I made a template of the shape of the sheet metal there, and I’m going to cut out the original, weld in new material, and try again. Another piece of information I have from Kurt: Vector isn’t Mad Max.  The inspiration for the notebook of sketches from which Vector was constructed was the Resistance technicals in Terminator.  (The first Terminator movie, obviously.)  So for a long time, I’ve been thinking of replacing the inscription with something more Terminator related.  My first thought was the phrase “No Fate But What We Make” or possibly just “No Fate”.

And then I did this to Tensor: 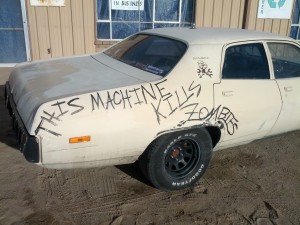